Spanish courses in Ávila at the best price.

Ávila is one of the most picturesque and historical cities in Spain. A relaxed city, near to Madrid, it is known for its spectacular medieval wall that still surrounds the city. It is ideal for studying Spanish.

The Spanish school in Ávila offers intensive courses that help students to improve their Spanish as quickly as possible. The intensive courses consist of 20 hours of lessons per week. The Spanish classes have a practical focus and are orientated towards tangible results, with small groups amounting to a maximum of 8 students per class. Our programs look to facilitate a complete state of immersion in the Spanish language. We don’t only focus on grammar; we place great emphasis on the application of the language in real situations. We have developed our own teaching materials that look to expedite learning and accelerate results.

Our practical focus distinguishes us as a school.

Furthermore, we offer Spanish courses with a focus on Spanish culture, for those who seek to deepen their understanding of the development and modern day reality of this complex and fascinating phenomenon.

At the end of classes you will be able to enjoy the cultural activities that we organise. The activities present a great opportunity to get to know the city. 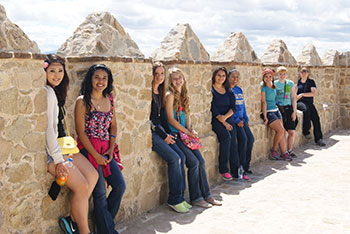 We plan excursions to small towns such as Arévalo, Madrigal de las Altas Torres (the birthplace of Queen Isabel the Catholic), Las Navas de Marqués (whoch hosts the castle of Magalia, the boat of Ávila and the Bulls of Guisando, stone sculptures of Celtic origin.

If you are a fan of nature, the Parque Regional de la Sierra de Gredos is a must visit.

As well as studying, Ávila’s visitors can enjoy an exciting nightlife. Year round the Old Town hosts parties and cultural activities.

The School organises activities which aid the development of students’ linguistic skills, in the company of native teachers. It is a great opportunity to practice comprehension and expression in Spanish.

Here are some of the activities you can enjoy in Ávila

All of the accommodations are situated near to the School.

You can choose from the following:

Live with a Spanish host family- ideal for those that want to experience the customs, cuisine and daily way of life of Spain. All of the families live centrally, in properties which are easy to get to.

Hotels and hostels- We can help you reserve a hotel or hostel in the city.

Ávila is known for the beautiful walls that surround it. Hidden within them is a very valuable group of churches and renaissance palaces.

The symbol of the city is its protective wall, one of the best preserved medieval walls in Europe today. 2 and a half kilometres in length, its perimeter has 100 towers, 6 doors and 3 smaller entrances. The door named Los Leales, one of the main entrances to the old city, opens out into the Cathedral, a striking and imposing structure. Its bell tower leans against the city wall, constituting the densest part of the cities defences. It has both gothic and baroque elements, with its interior decorated extravagantly to the minutest detail.

We recommend a visit to the Diocesan Museum and the nooks and crannies of the medieval city, as well as the Plaza de los Dávila, with more than a dozen renaissance houses of noble lineage. Among these properties the highlights include the mansion of Los Velada, the palace of Los Valderrábano and the palace of Núñez Vela.

Ávila was the birthplace of many famous Spanish people, such as Santa Teresa de Jesús and San Juan de la Cruz. You will come across an abundance of churches and convents dispersed throughout the city. Outside of the city walls you can find the Monastery of the Incarnation. Another important building is the Basilica of Saint Vincent, which is considered the most beautiful example of Roman architecture in the city. The Church of Saint Peter is one of the oldest in the city.

Sign up with us and we look for the best Spanish course at our partner school in Ávila.


If you have any questions relative to this course makes your consultation through this form:

In fulfilment of the regulations in force on the subject of personal data protection, the user is informed of the existence of an automated file, which is the property of Schools & Courses SL, with personal details that we may have been provided with during the course of your navigating our website, when intending to arrange your course request.

The user will have to complete the forms with true, exact, full and up-to-date details, with the management reserving the right to not provide their services to those users registered under false details, without harming any legal action that could proceed.

Schools & Courses SL is obliged to comply with the obligation of safe-keeping files, and will adopt the necessary steps in order to avoid disturbance, loss, treatment or unauthorized access, taking into account at every moment the current state of technology.

In the case that the transfer of details to other bodies may be considered suitable, the user will be explicitly informed of the intention for the file, of the transferred details and the name and address of the transferee, so that they may give their irrefutable consent to that respect.

Finally, Schools & Courses SL informs you about the possibility of exercising your access rights through a written request directed to the following email address: info@closeteachers.com or to Schools & Courses SL, C/Carretera Bóveda, Edificio 6 - 01427 Corro (Álava) Spain: in the request the user's name(s) and surnames(s), proof of address and a photocopy of a national identity card or passport must be made clear. In the case of representation it must be accredited by a reliable source.

The personal details that are supplied to us will go on to form part of an automated file that is the property of Schools & Courses SL.

The user authorizes the treatment of their personal details that they have voluntarily submitted in order to be able to provide the entrusted services, and gives their express consent to receive information that publicises our new services and offers, by any means, including email.

Likewise the user gives their consent for Schools & Courses SL to transfer their details to associates and collaborating companies, such as with those other businesses or physical or legal persons agreements are arranged to provide a better delivery of service, respecting the Spanish legislation about data protection.

In any case, you are able to exercise your access, correction, cancellation or opposition of agreement rights according to the 15/1999 Act of Personal Data Protection, personally directing your request by email to info@closeteachers.com or via a written request to Schools & Courses SL, C/Carretera Bóveda, Edificio 6 - 01427 Corro (Álava) Spain.