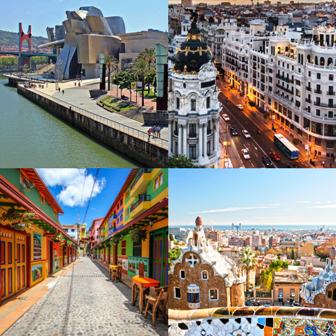 There’s only so much you can learn from reading a book, listening to Spanish reggaeton or watching Narcos on Netflix. Although it is a daunting idea at first , if you really want to immerse yourself and be on your way to becoming fluent in Spanish , it’s time to take the plunge and go abroad! Spanish is the main language spoken in 21 countries around the world , so you are by no means limited by your choice of destination , which makes choosing from all these countries quite tricky! So this is where we come in to give you a condensed list of what we believe are the top 4 destinations for learning Spanish.

Bilbao
If you want to learn “proper Spanish” as the Spaniards themselves say, then Bilbao is the perfect destination for you to pick up a clear, defined accent. Unlike in the South of Spain, the Bilbaínos like to pronounce everything, so you definitely will not slip into the bad habit of speaking sloppy Spanish. Aside from the spoken Spanish itself, Bilbao is the perfect destination for both city and nature lovers, as you have both landscapes right on your doorstep. Surrounded by luscious green mountains, the city itself is not huge, but definitely has a buzz about it and has plenty to offer in terms of culture, history and social activities . ‘Ir de poteo’ is a popular evening event for socialising and consists of having a drink outside with friends and bar hopping as the night goes on, so whether it’s hiking or ‘yendo de poteo,’ you’ll have a terrific time! Not to mention the famous Guggenheim , the delicious tapas of the region - ‘pintxos’ - or the beach which is just a quick metro ride away…!

Madrid
It’s hard not to resist choosing Spain’s capital to learn Spanish in. Madrid is one of Europe’s most beautiful cities and Spain’s biggest city, so has no shortage of things to see and visit. Just by taking a stroll around the city, you are sure to stumble across stunning spots such as Retiro Park where you can have a picnic in the summer and enjoy some people watching by the lake. You’ll also find an array of cultural activities to do, such as going to the Reina Sofia museum or the famous Prado museum . For this reason, you will never be bored in Madrid, but as the country’s capital, don’t be surprised to be surrounded by bustling tourists with their selfie sticks. As much as we love Madrid, one downside of it being a tourist hub is the fact that lots of people speak English and you can pretty much get away without having to utter a word of Spanish . So much so that it’s safe to say that it requires determination and persistence to speak Spanish in your day-to-day life with some locals, as they are very keen to practise their English with you!

Colombia
Feeling adventurous? Wonderful! Colombia is sure to meet your needs when looking for an exciting, colourful environment in which you can learn Spanish. Head to the sprawling cities of Bogotá or Medellín and you will be immersed in Latin America’s ‘clearest’ Spanish whilst being able to take advantage of the great transport systems to plan a series of weekend trips to explore the beautiful, varied scenery. Contrary to popular belief that it is best to learn Spanish in Spain , central Colombia is in fact an ideal location to learn Spanish, as the accent is not very strong and people speak relatively slowly - avoid the Caribbean coast as the accent is much harder to understand! With thousands of Spanish enthusiasts heading to Colombia in their quest to become fluent, the country has some really good language schools to choose from and has plenty of opportunities for you to practise your linguistic skills!

Barcelona
On the Catalonian coast, Barcelona is a dream destination for city lovers who also love a spot of sunbathing. Las Ramblas is the most famous and popular street in Barcelona and is enough to keep you occupied for an entire day what with all the restaurants, cafés, florists, fresh street food, human statues, art and architecture to admire! This makes it a fantastic location for enjoying Spanish cuisine (especially fresh seafood) and for keeping yourself busy with things to do, although there is definitely a lot of truth to the ‘too touristy’ line you may have heard already. Barcelona gets 4th spot for us also due to the fact that 95% of its population understands Catalán, so learning Spanish may not be as easy as in other locations, however 98% of the population does speak Spanish, so by no means let this put you off from going here to learn Spanish!